I didn’t see our house in person until we moved here. My husband flew out to see it once but, had our realtor had been comfortable with it, we would have purchased sight unseen. We had family check it out so with their approval, along with 100’s of pictures, we felt we had a good grasp on what we were getting ourselves into. The only real surprise when I finally got inside was a good one: the kitchen was much bigger than it looked in pictures (below).

Before we get anymore into this kitchen, let’s take a little walk down kitchen memory lane for some lessons learned…

Our previous house had dreary 60’s kitchen that was closed off from the rest of the house. We completely gutted it, ripped down walls, and designed and built a kitchen from scratch ourselves…and had babies all at the same time. Total dumb move, especially since we knew we would only be in the house for 5 years. What were we thinking? I don’t know. We didn’t even finish the renovation until 2 years in. See that range hood cover thing? My economist/woodworker husband built that beauty, along with all the cabinetry, on time that should have been spent on his research. But it was BEAUTIFUL and the functionality and size was perfection. But not worth the time, work, stress or money in hindsight.

After that house, we spent 2 years in a 1919 rental that had a weirdly HUGE eat in kitchen in relation to the rest of the 100 year old house. A downstairs bathroom was literally a converted coat closet so I’m not sure how an oversized kitchen ended up in the mix. (I’m talking huge, like bigger than most modern master bedrooms.) It was so hard to actually cook in there. The fridge, sink, stove and pantry were literally in different corners of the room. The thing I did love, in an obsessive way, was its design: 50’s era wood cabinets that had been painted white, sea foam green formica counters, and a matching mottled tile backsplash. This is the best kitchen picture I could come up with, don’t mind those rolls!

So after these 2 kitchens, I had a strong idea of what I wanted in my next kitchen and hoped I would get it:

No major renovations – NO MAJOR RENOVATIONS!!! DIYing a kitchen from scratch once in our lifetime was enough. Our mantra for this whole house has been to make things good enough, not perfect. There was no extra budget to pay someone else to do it and my husband’s time is so limited right now, for at least the next few years. And I honestly didn’t want to live through the inconvenience of a kitchen remodel. Also, I’m beginning to see just how quickly a new kitchen becomes an old one in need of an update. I didn’t need a brand new perfect kitchen, like I once thought I did. I needed something that was easy and good enough.

Surface updates only – I wanted to use existing cabinetry. I was prepared to do some surface work/painting, buy new appliances (eventually), install flooring and DIY a new counter if needed. But that’s it.

Original condition – I preferred a kitchen in original condition or close to it. I didn’t want some thoughtlessly flipped granite kitchen house (and the price increase that comes with the “updated kitchen” listing description). Aesthetically, the closer to 50’s/60’s, the better.

A Practical layout – Since we didn’t want to do any major remodels or reconfigurations, a well planned out work triangle and appropriate size was totally necessary.

No great room – When we opened up our previous kitchen to the family room and dining room, it was nice to cook and see the kids and watch tv all at the same time, but I have a problem with doing dishes in a timely manner and then seeing those dishes from every public space in the house is miserable. I ended up preferring our dedicated kitchen in our rental house that was separate but not hidden. Where dirty dishes could pile up and then be walked away from.

That brings us to California. This house nailed it all and the kitchen was a huge selling point for us. The cabinets were original to the house and were solid wood, though the wood had been painted somewhere along the line. The countertops were tiled and I planned to redo them until I saw them in person in their pristine condition; I’m guessing they were part of a 70’s remodel that shows up elsewhere in the house. The appliances were horrible biscuit colored but well placed. The oven was a cute little original black number that I may never part with. It had an eat in kitchen, something I love with messy kids who eat all day long. The floors were bad linoleum. It lacked counter space but storage space was sufficient as long as you don’t hoard (which I do when it comes to vintage dishware, if you couldn’t guess). A built-in desk area and an attached laundry room with a large pantry in it adds to the functionality. The kitchen also boasts the best views in the entire house, which makes cooking and cleaning the tiniest bit better. It was super clean and you could tell it has been well cared for over the years (the inside of my oven looked brand new when we moved… it’s embarrassingly trashed now if you were wondering). And in person it was so spacious, something I didn’t really expect.

This is what it looked like before we moved in. Lots of beige. 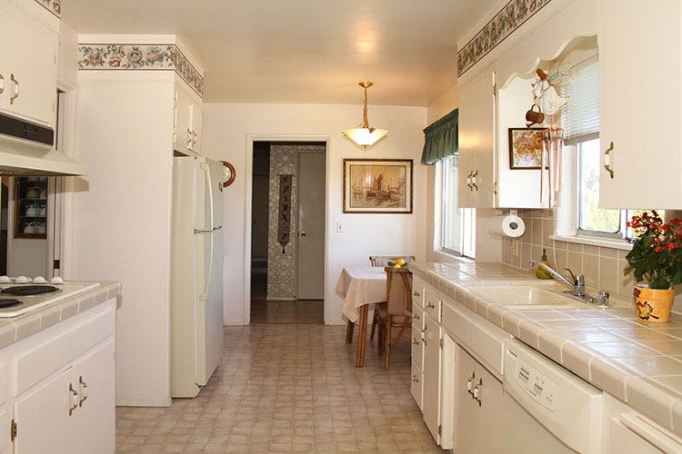 Tune in next time to see our game plan and progress so far. Thanks for reading!

Me sleeping well next to all my vintage crap in December 🤶💤
Barely remember how to post here but trying to get back to it. A recent eBay acquisition, a vintage abstract painting from 1956. Way more purple than I’d usually go for but HAD TO HAVE IT 😍
Finally getting around to sharing last year’s bathroom project, where we packed our teeny tiny primary bathroom with all the orange penny tile and terrazzo we could! The lengthy tedious details are on my blog (link in bio) and I have a highlight of the process/progress somewhere above 🧡
Christmas photo dump, pt 2
Christmas photo dump, pt 1
Exterior illumination ✅
Having some blue bathroom discussions in stories and would love layout ideas if you have any! Summary: this bathroom is uncomfortably large and I want to create some privacy around the toilet area without touching the original blue tub/sink/shower. Help! ✨
Day to evening look 🎃
Getting closer on the never ending bathroom project. Recent good things: Counter! Sink! Faucet! Shower glass! Penny tile! What we are still working on: Vanity doors & drawers! Lighting decisions! Mirror! Paint! I’ve shared most of these progress pics in stories but trying to be less neglectful of my feed so these live here now 🧡
Happy October from me and my Home Depot bucket
All my friends are here.
Add this wood to list of woods my dog wants to eat so I had to fence it off 🐾