For years I thought I was this one thing (a frugal relaxed camper), but turns out I’m this other thing (a snobby hotel vacationer). I was confused because I hoard cute things.

Long ago, before I should be thinking about such adult matters, I decided I wanted an old travel trailer BAD. Specifically a late 50’s/early 60’s Shasta. They have wings so obviously I needed one. One random day my husband found a 1958 Shasta Airflyte trailer in Beaumont, CA and went to pick it up a few hours later. That’s why he’s the best.

We were young, newly married, not parents, and living in a small apartment in LA. We happily worked on it every weekend for a year just to get it road-ready. It was so much work. My husband and my father-in-law rebuilt almost the entire wood interior, which was rotted. I like to call it our first home; the first in a long line of fixer-uppers for us. (No, we didn’t actually live in it…except for a few reckless days in NC when we showed up without a place to live). 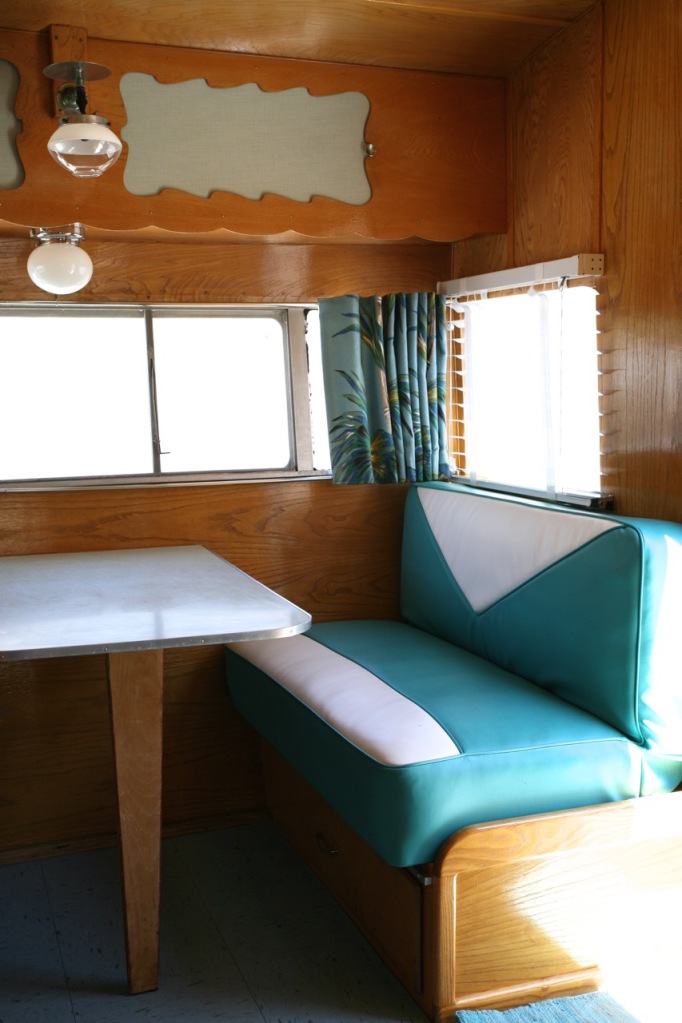 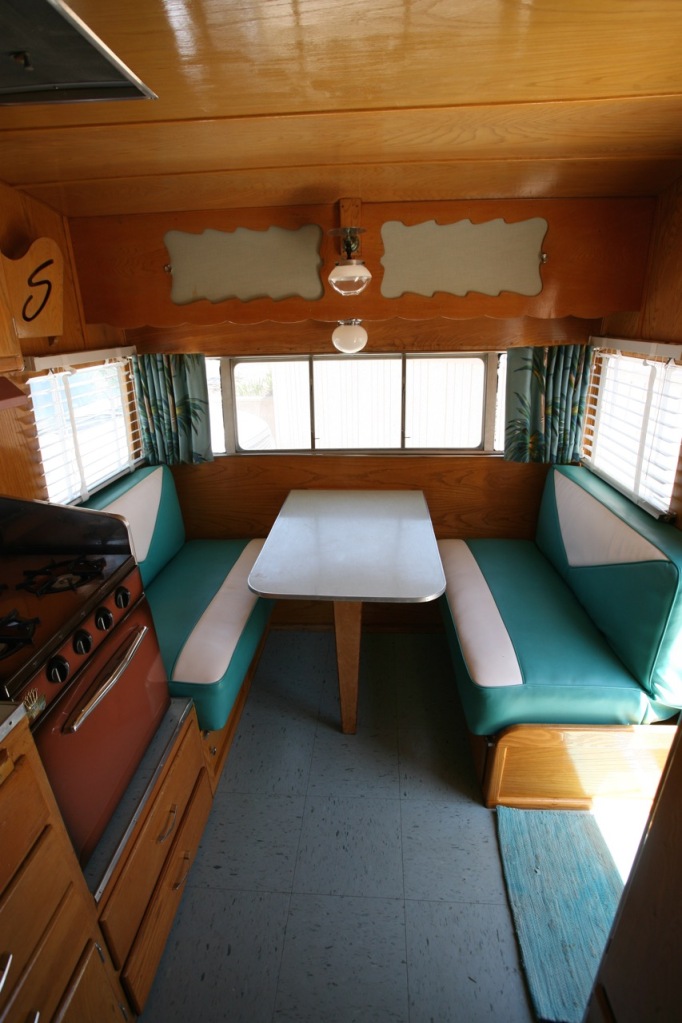 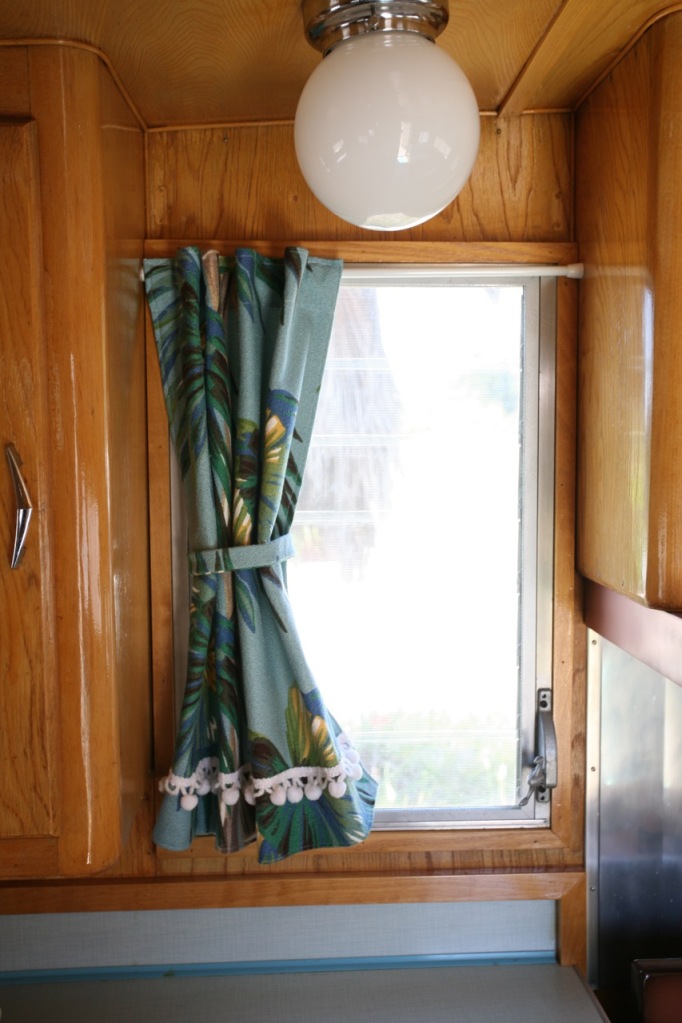 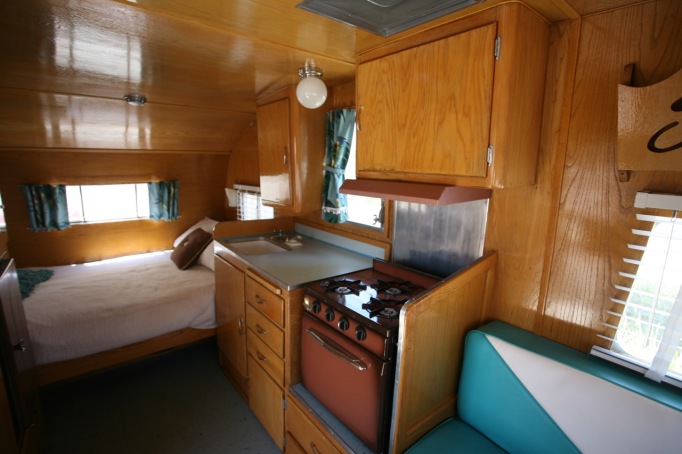 There’s no question that it’s one of the cutest things in the universe. But so many buts: For the next 10+ years we were bound to camping. Bound. And bound to the care of this gigantic object. But the biggest problem by far was an unanticipated one: a lack of spontaneity. My dream vacation is a road trip. I’m like a dog that loves car rides. I could sit in a moving car for days and stare out the window at our great nation. A trailer, especially an adorable one, seems like it would make that life easier and cheaper and more fun. Totally miscalculated that one. Towing a trailer around the country is actually miserable. Here’s the break down:

Pros of Owning a Vintage Trailer:

Cons of Owning the Trailer:

To summarize: If you don’t have kids, enjoy fixing up old stuff, have endless time and money, and enjoy hunkering down for days at close-by campgrounds, then vintage trailer ownership may be for you! Turns out, I don’t like actually camping that much. It’s the road that calls, not cooking meals in the wilderness. And hotels, even the high-class ones high-class me prefers, are a steal when you consider the true costs of trailer ownership.

So you can see where this is going. My husband had wanted to sell it for many years but I, the girl who hates feeling weighed down by unnecessary possessions and rarely feels sentimental about things, couldn’t let it go. I had assumed we would always have it. That our future teenage kids would one day sleep in a tent outside of it with their friends and then it would be our retirement RV and all sorts of pathetic things. But we outgrew it far sooner expected to the point that it was impractical to hold on to. The last straw was the ocean cliff death road to Big Sur where the trailer literally fell off the tow hitch. The realization that we could sell it for a bit of $ and then burden ourselves with an early 60’s Thunderbird instead sealed the deal.

We sold the Shasta last summer. And I was really sad, like I’ve never been sad over a thing before. The Thunderbird really softened the blow, but I still miss it. And in no way regret owning it. Some great things happened in that aluminum and plywood shack: In it I saw 30 states, 10 national parks, and several Walmart parking lots (you haven’t lived until you’ve slept with one eye open in a Walmart parking lot). Two babies and 1 dog eventually joined us. I was sitting in it in the middle of Kansas the first time I ever saw a firefly. We found out we were expecting our first baby while towing it around the Florida Keys (pregnancy test NOT done in a Walmart bathroom, as funny husband begged). The first time we camped with said baby was magical, in the Outer Banks. The second baby almost got us kicked out of Shenandoah and every other place with his night screaming. And on and on the memories go.

So, how did this story end? With a nice retired couple hitching our trailer to their truck and me pathetically begging them in our driveway to contact us first if they ever think of selling. #dibs

Long may you run little Shasta.