I was going to title this one ‘Piss Off, Nonstick Pots and Pans’, but I thought that may come off a little aggressive. Earlier this year our house made a full switch from nonstick cookware to enameled cast iron pots and pans. Ousting the nonstick has been on the to-do list for years but there always seemed to be more urgent lifestyle changes to be made. The issue finally came to a head when our 12 year old nonstick pans started peeling, making them extra extra bad, so I finally got my crap together and found a solution. I settled on enameled cast iron, mostly for the easy of cleaning and its strong non-toxicity. Bonus: it’s P-R-E-T-T-Y!

Call me crazy – it wouldn’t be the first time – but why shouldn’t everything in our homes, even the stuff hidden behind closed white cupboard doors, be beautiful and colorful and fun? I haven’t read that book about de-cluttering and how each object in your home should elicit joy when you hold it in your hands (I almost used illicit there, ha!), but I’m sure I would fully be onboard. There is a beautiful and awesome version of most every functional object, so that’s the one I think I’d like. If I must have pots and pans, I want the pretty ones. Too shallow? 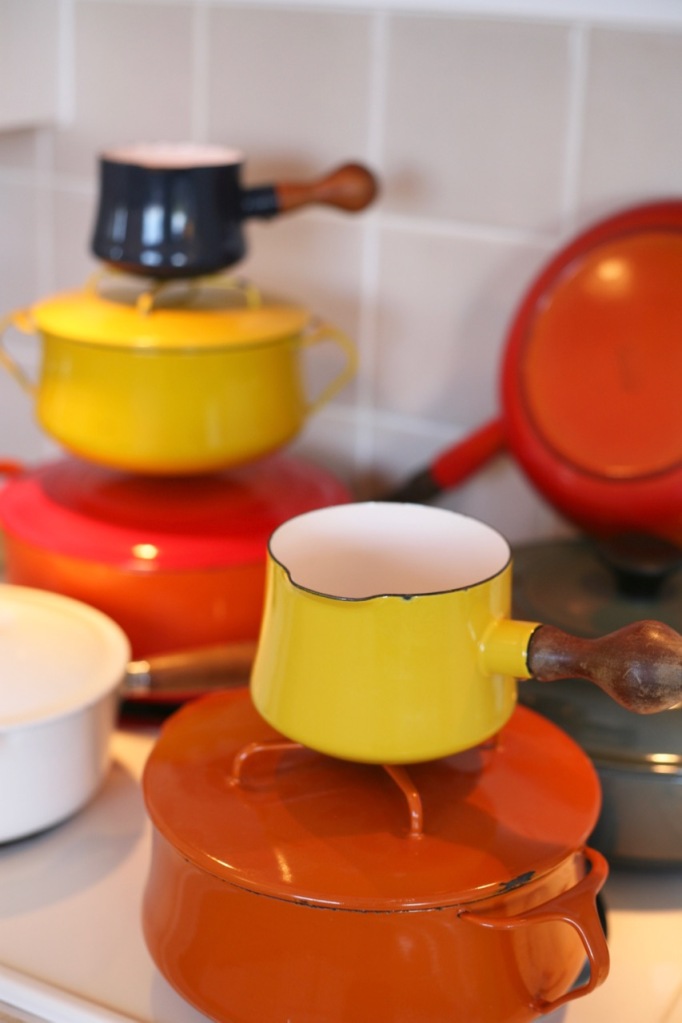 I had a few vintage Dansk Kobenstyle and Descoware pots and pans already that I’ve been lugging around the country for years but never really using because sometimes I have a stupid urge to save things that I think are special instead of using them. One was even my Grandma’s old orange pot that she gave to me when I moved into my first apartment = especially special, even though I think she gave it to me mostly because it was more my style than hers and she never used it. But it’s lame to have stuff that you don’t use and I really try to not be that way, so the cast iron enamel conclusion was extraordinarily great because I’m finally putting these beauties to work.

I filled in the missing pieces with vintage or used Le Creuset pots, which I’m loving. The Kobenstyles are lookers, but the quality of Le Creuset is incomparable, so much so that even 70’s Dansk design can’t compete. I bought pieces that were in good shape inside but cosmetically not perfect on the outside. These seriously last forever so, as far as I can tell, a 40 year old pot works just as well as a brand new one. I still catch myself throwing an enameled cast iron pan on the stove and cranking the heat to high like I used to do for other pans, which is a bad. But once you get the hang of it, they cook so well and they are deceptively easy to clean.

(Spoiler: I didn’t care well for that little orange skillet up there and destroyed it a few days ago, after I took these!!! I accidentally turned the wrong burner on high, came back 10 minutes later confused about why my kettle of water wasn’t boiling, but also why my normally orange skillet was bright fire red and the enamel inside was bubbling. A scary and expensive mistake. Lesson learned, hopefully, but habits are hard to break. So sad.) 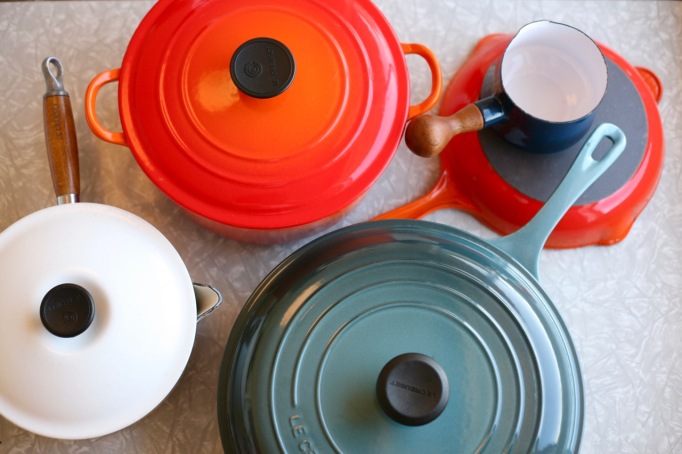 There have definitely been stand outs that we use more than others, shown above. For reference, we are a family of 4, we reluctantly cook at home at least once a day, we rarely cook meat (I’m a vegan, husband is a sad carnivore living with a vegan cook), we don’t own a microwave, and we hate doing dishes. For our needs, we could get by daily with these 4 (5) pieces:

Thank you to the industrial designers out there for making life better through design. I can’t lie and say that I now like cooking. Because it’s so lame. But it’s a better experience than it used to be because it looks like a party in my kitchen. Thanks for reading!

P.S. I can’t seem to find a non-nonstick replacement for my nonstick electric griddle…any ideas? We used that thing a lot, probably because of my pancake addiction.