Alright, this bathroom is a lot, I know. A lot of blue. A lot of old “retro” fixtures and flooring. A lot of square footage. A lot of stripes. All of this wildness is more than I would usually cram into one room. Since this is a bathroom, though, I’m taking some bathroom artistic license. Big Blue here is one of two bathrooms in our house, and serves as our kid and guest bath. Obviously, we still have a ton to do, but here’s a look at our progress/repair work so far.

This is where it started. Floral walls. Plaid ceiling. Orange carpet. Blue fixtures. The 70’s were crazy, guys. (As if I’m one to talk.) But it had great bones. So clean and so huge.

The first thing we did was remove all that wallpaper. It was a tough job. Underneath, it was a gluey, mildewy, roughed up mess. It was going to take us days to scrub clean so we decided to pay a drywaller to skim coat over it all so we could start fresh.

Next, I painted the walls a faint, nearly white baby blue. At this point the carpet was still in and I thought we’d be installing white tiles, so I probably would have just gone with white walls had I known this linoleum was under there…but I didn’t so I didn’t and it’s one of the great happy accidents of my life. 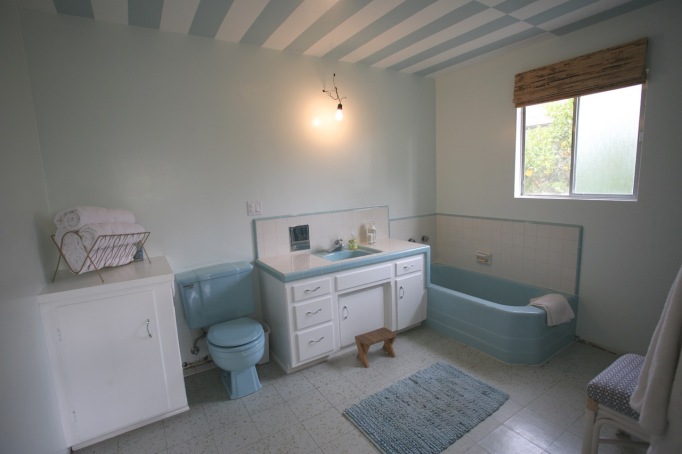 We also had to address a leaking shower pan, which meant the old tile shower floor (and first few inches up had to be removed, a new pan put in place, and then all retiled. We were able to salvage some of the blue tiles framing out the step through but not all and since we couldn’t find a perfect match, we decided to replace with salt and pepper tiles that matched the interior of the shower.

The tile job required this, which we have yet to drywall over. Pretty, huh?

We decided to go with a basic white penny round tile on the shower floor from Home Depot by Merola. We love it.

Next came carpet removal. We had kept the carpet in during the painting, drywalling, plumbing and tiling jobs that were happening in the weeks after we moved in as a lazy drop cloth. When I finally got around to removing it, I found gorgeous original linoleum. I’m going to venture to say the best linoleum ever made. Baby blue with glittery splotchy gold flecks. Now, I knew it was there but only my husband had seen it and he claimed it was unsalvageable. On his word, I had made contingency flooring plans: glittery white terrazzo flooring. (Oh man, that’s good, huh?!) Turns out, he was just straight up wrong. The linoleum was in great condition except for the damage caused by laying carpet over it and then removing it – nail holes, cracks and grimy spots. Most of the damage is confined to the perimeter of the room where the carpet tacks were. I repaired what I could (with extreme caution, because linoleum can have asbestos in it) by filing in holes and adhering chipped pieces back in place. I hope baseboards will cover up most of what remains. The only outstanding issue is where several quarter pieces of tiles are missing behind the toilet. I need to come up with a solution for that.

Our next step was to paint the cabinets bright white instead of beige.

I replaced the existing hardware with these cute vintage smiley chrome ones, from eBay.

The original tiles and fixtures were in pristine condition, miraculously. So it was a no brainer to keep them. The tiles are a standard 60’s salt and pepper…white with tiny black flecks.

We repaired the master bath shower at the same time as this bathroom’s shower so all 4 of us were left with only this tub for several weeks. Did I mention how much I hate baths?

We removed the original glass shower door for the shower tile work and replaced it with a Target curtain for now. We may rehang the door, it’s taking up space in our garage for now.

We hung this towel rack. After considering an Eames Hang-It-All, I found this over the door rack at TJ Maxx and had my husband saw off the over the door part. Ta-da. $7 instead of $200. 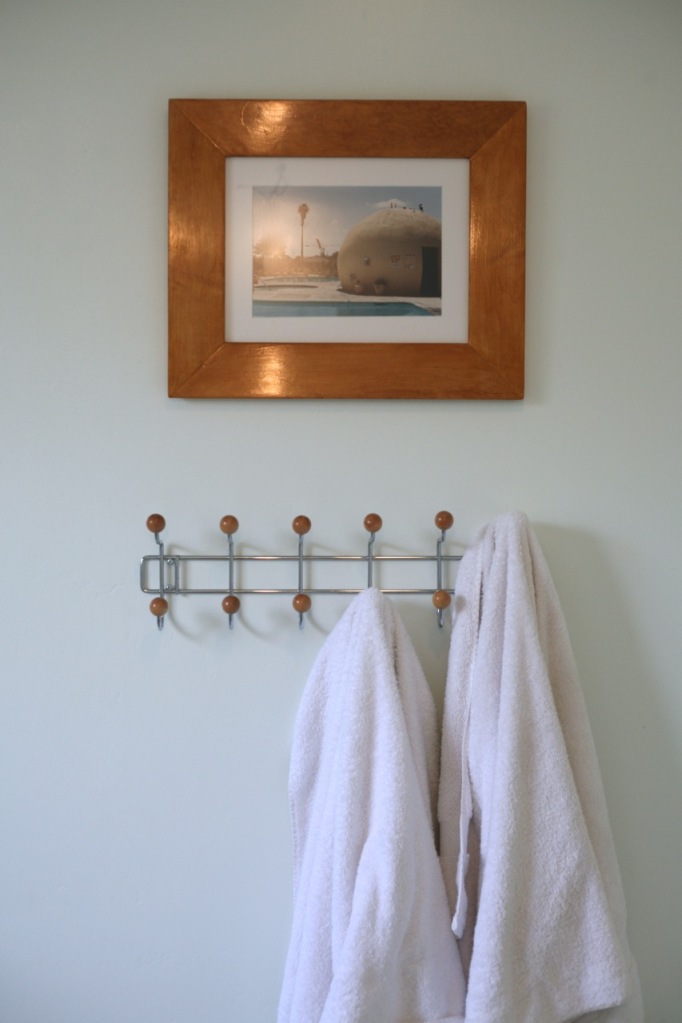 This sweet little rattan stool was left by the previous owner under the kitchen desk. I reupholstered it in this fabric that is actually a tablecloth from Target. The pattern and color, splotchy and bouncy grey and gold dots, tied everything together so well. 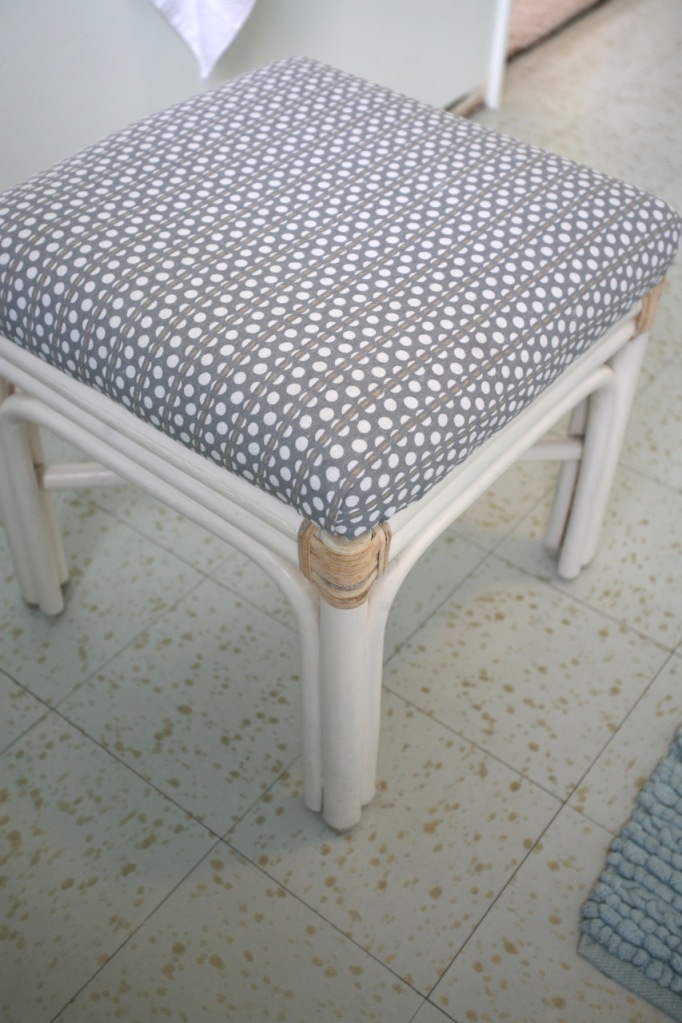 This wall needed something gold and graphic. I found these metal fish on eBay. They aren’t vintage but had a good look. And fish in the bathroom…duh. I painted them gold and hung em up. 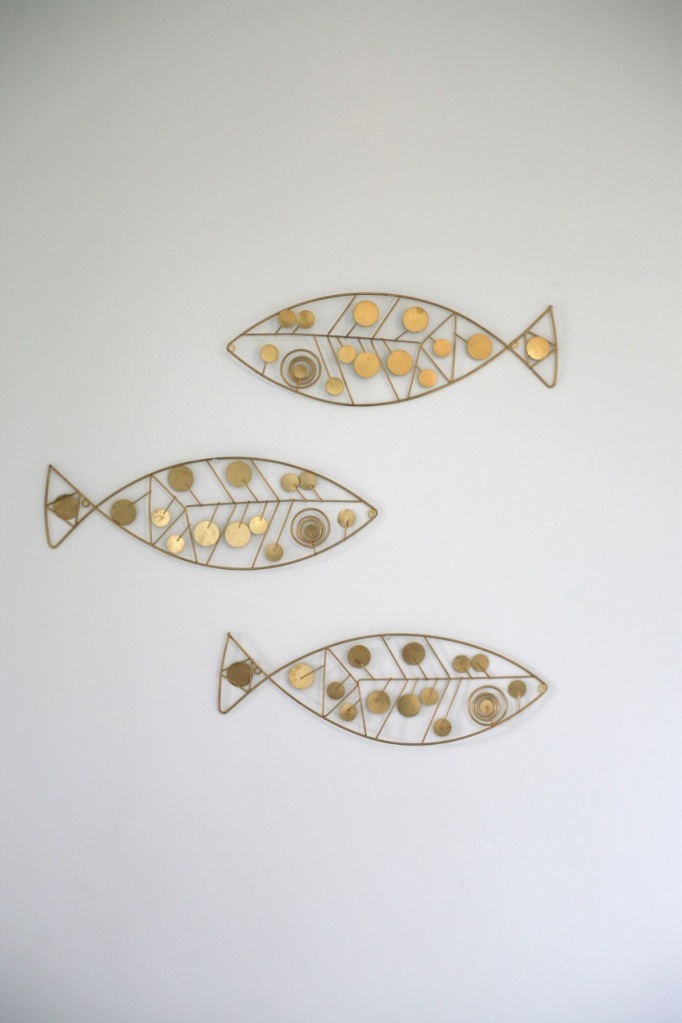 Some of it’s charming original chrome features: A fold away rotating toothbrush holder and a magazine rack/TP holder.

Do you like lists as much as I do? Hope so…

This light and its pair are going to be swagging all over this bathroom soon. Along with a mirror, when I can decide on one.

What? Your wife doesn’t send you pictures of all the lights she buys on eBay just to taunt you? Consider yourself lucky to be married to such a mature woman.

One thought on “Blue Bathroom Progress”

Me sleeping well next to all my vintage crap in December 🤶💤
Barely remember how to post here but trying to get back to it. A recent eBay acquisition, a vintage abstract painting from 1956. Way more purple than I’d usually go for but HAD TO HAVE IT 😍
Finally getting around to sharing last year’s bathroom project, where we packed our teeny tiny primary bathroom with all the orange penny tile and terrazzo we could! The lengthy tedious details are on my blog (link in bio) and I have a highlight of the process/progress somewhere above 🧡
Christmas photo dump, pt 2
Christmas photo dump, pt 1
Exterior illumination ✅
Having some blue bathroom discussions in stories and would love layout ideas if you have any! Summary: this bathroom is uncomfortably large and I want to create some privacy around the toilet area without touching the original blue tub/sink/shower. Help! ✨
Day to evening look 🎃
Getting closer on the never ending bathroom project. Recent good things: Counter! Sink! Faucet! Shower glass! Penny tile! What we are still working on: Vanity doors & drawers! Lighting decisions! Mirror! Paint! I’ve shared most of these progress pics in stories but trying to be less neglectful of my feed so these live here now 🧡
Happy October from me and my Home Depot bucket
All my friends are here.
Add this wood to list of woods my dog wants to eat so I had to fence it off 🐾