Ready for a wallpaper ramble? Here it is: I’m getting ready to dig into my dining room soon and I’ve got wallpaper problems. The issue being whether I keep it or rip it down in a fury. 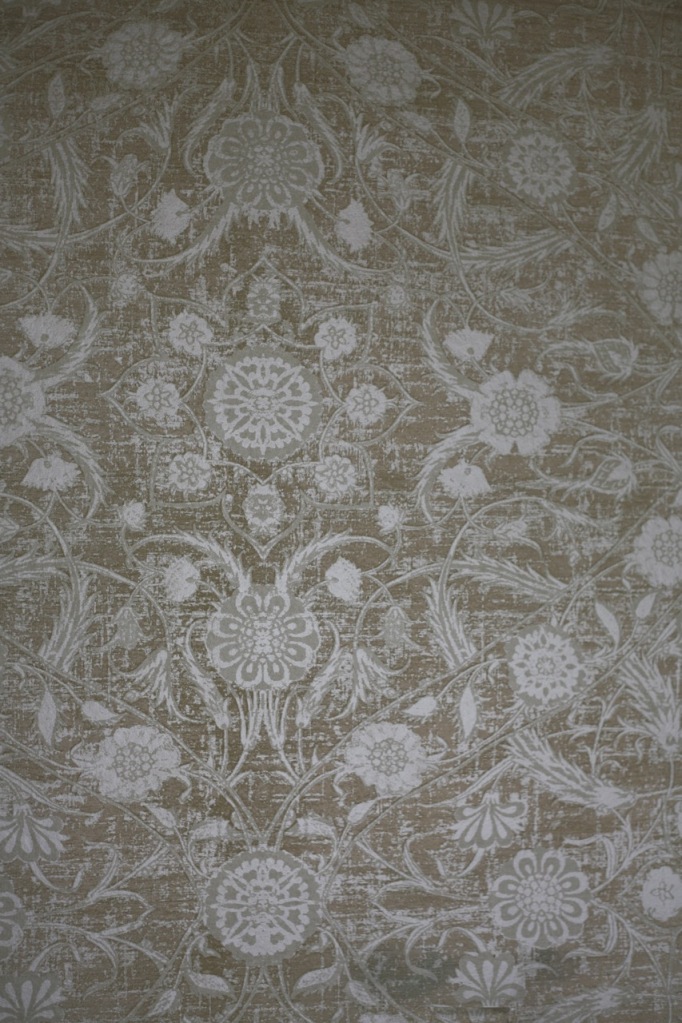 This wallpaper used to cocoon the house. Actually, just the entire long hallway and this room, but it ate up a lot of square footage. The hallway wallpaper was immediately removed because it was dark and dingy in there. The dining room stayed probably because of some form of nostalgia on my part. There’s this side of me that thinks I’d be a fool to get rid of it: it’s a cool color – olive green and metallic, good quality fancy stuff from 1970 so it feels like a piece of the houses history (who says this crazy stuff???), in good condition aside from a few patchable repairs, and it really reminds me of wallpaper in my grandparents house when I was a kid.

But really, why am I keeping this stuff around? I don’t love it and what’s the point of living with what you don’t love? The print is too floral and formal for me and it abruptly and unnaturally ends above the doorframe in the middle of a wall, both giving me psychosis akin to that lady in that horrid book The Yellow Wallpaper (of which any papered wall regrettably reminds me of). We’ve lived with it for 2 years and I still feel the same as I ever have – indifference. The fact that I wouldn’t choose it if given the choice should be and usually is answer enough for me. Yes, it is kind of pretty and, yes, it’s time to go.

I know I want it somewhere in the dining room/family room space but the question is where. I’d love to just hang it in the dining room for delineation but there isn’t a practical way to do it that does’t involve stopping mid wall – going back to the psychosis thing. I don’t really want to do the entire space. And I’m not looking for a feature wall of wallpaper, but that may be the best choice. Right now I’m thinking of maybe just doing wall 1. I’d like to do walls 1 and 2 but I’m worried the family room will look too choppy. So maybe just only wall 3 and forget wallpaper in here? Ideas?