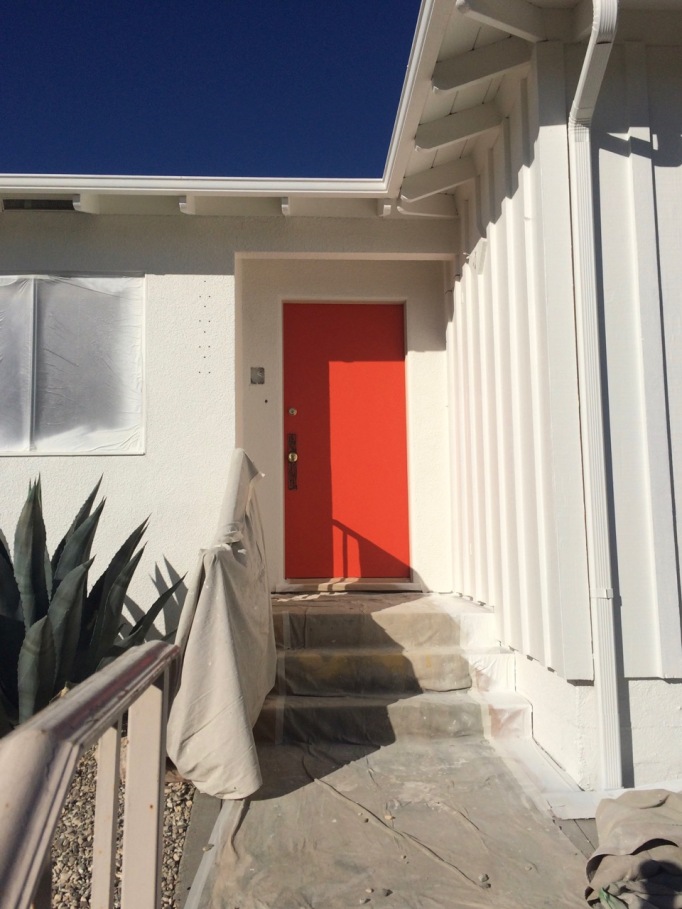 Great news over here: we are having the exterior of our house painted. As in, HIRING THE WORK OUT! I was planning to spend the fall doing the job myself, but after such a stressful and overwhelming first month of school/homeschool for me, we were curious what it would cost. When the quote came back extremely reasonable, we decided to clamp down on our spending over the next few months and go for it. My very talented designer/DIYer friend, Karen at Destination Eichler, described watching her house get painted by someone else like a mini vacation. I hope that’s how I feel too… because yikes are we ever dipping into that travel budget, haha!

The change of plans really truncated our timeline and I needed to pick a paint color like immediately. Thankfully, I already knew I wanted to go all white. Our painter expressed a preference for Sherwin Williams, who happened to be having a sale the week we decided to say yes. Pro tip: turns out they are pretty much always having a sale to create false urgency in suckers like me. In an effort to save every penny we can, I spent hours choosing a paint color to buy everything at sale price. FYI, I did ask if I could buy 30 gallons of untinted at sale price and come back to have it tinted if I couldn’t decide before the sale ended and got a reluctant “I guess.”

There are like 100 white paint colors. What the heck, do we really need this many options? Talk about agonizing over a boring decision. After reminding myself how much money we were spending and how this is basically a 10 year commitment, I dedicated myself to doing my best, turning into the neighborhood freak who painted white squares all over her house and stared at them for days.

Here’s my process in case you are in the same boat on a sea of tedium: 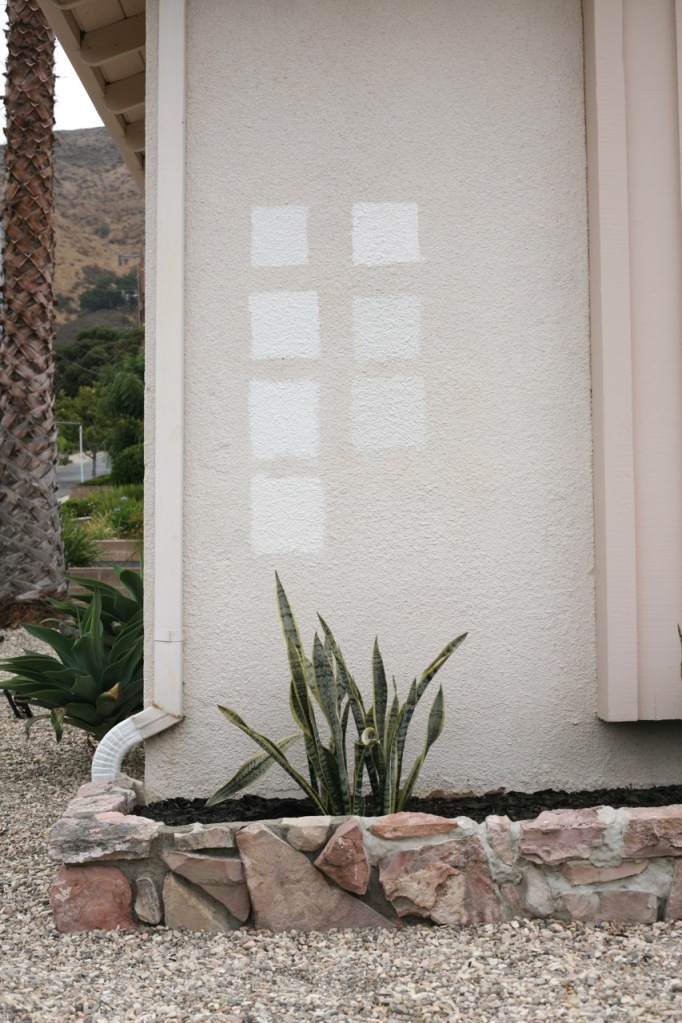 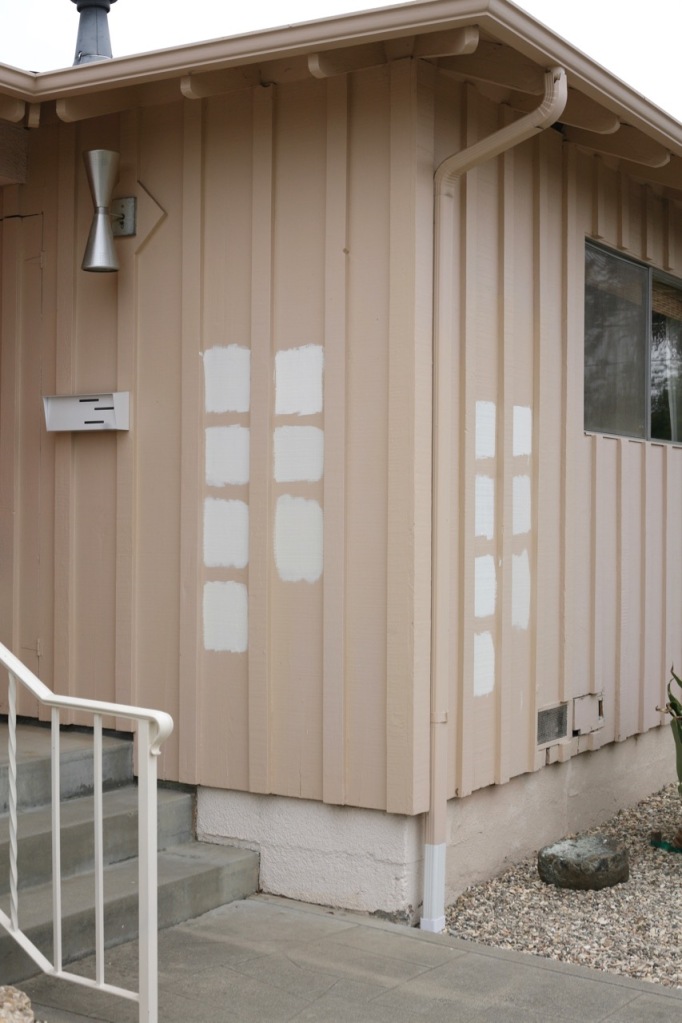 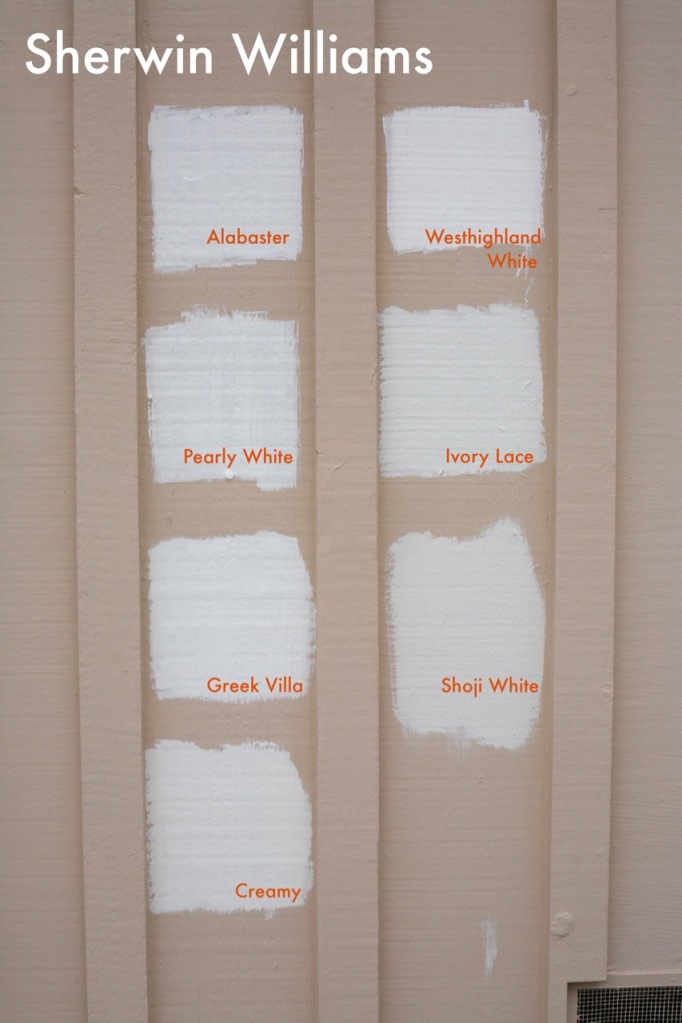 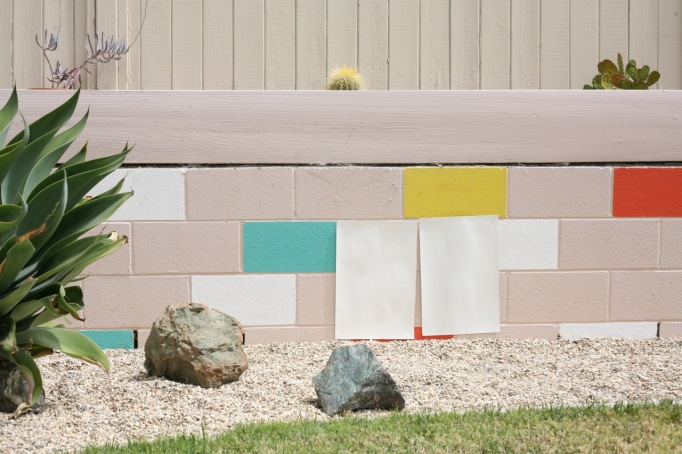 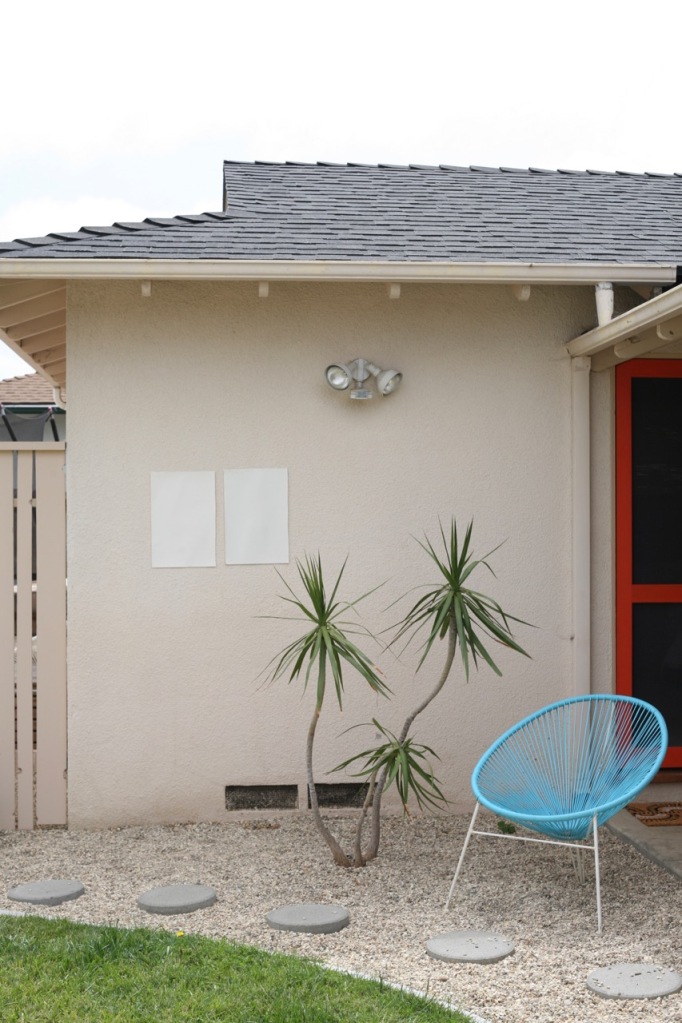 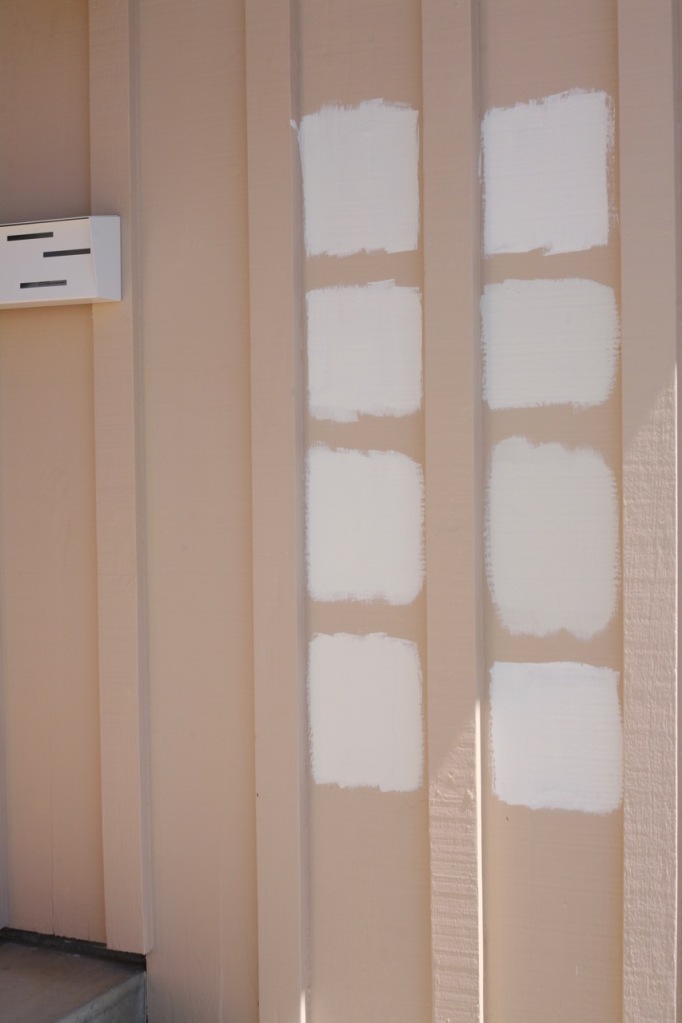 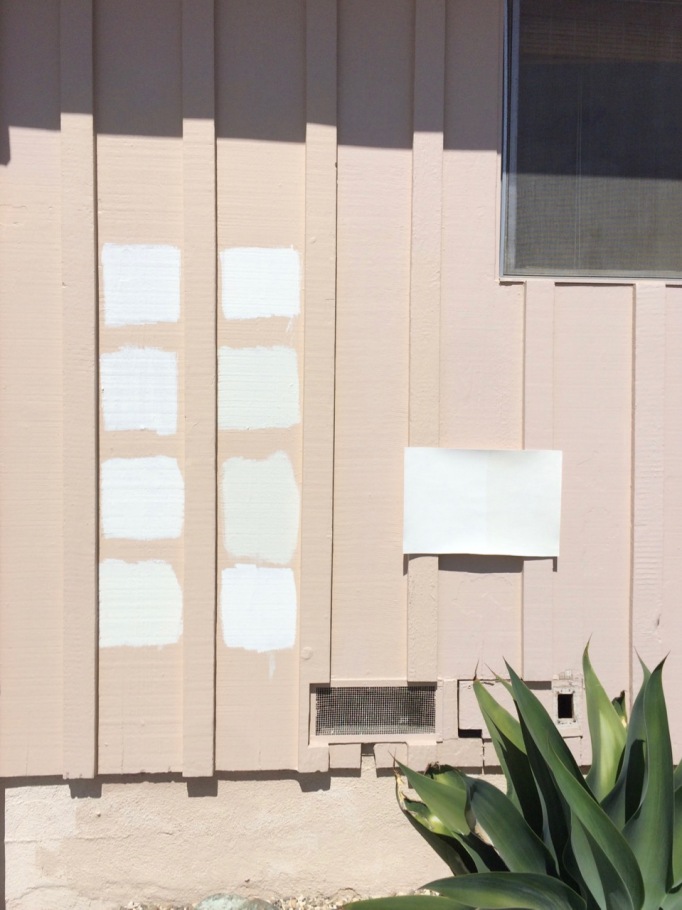 And that’s how you pick a white paint color haha. Such a joke. In the end, though, I chose one I’m really excited about. The one I should have just gone with from the beginning I guess!

Painting is almost done and wow what a transformation. I‘ll share more soon but lets just say 1. don’t forget your sunglasses and 2. we are SO Halloween ready with this color scheme. xoxo Jenny

Hi I'm Jenny, a weirdo hoarding vintage furniture and messing around with DIYs, design + restoration in our 1960's ranch home in SLO, CA!

I’ve been teaching art (to teenagers ❤️) for the past few months but have been lagging at making anything myself...so I signed up for a ceramics class! Here’s one of my favorite paintings of mine and a cheers to more of making weird crap 🍻 Tell me what weird crap you are working on!
Shared an end of year recap of favorite house projects on my weirdo blog. Though not a project exactly, this dreamy mid century headboard score definitely made the list! It took me 6 years to find one...well, one in my price range and the right size. (Found on Craigslist, fireplace too, lights on eBay, and husband built bed frame) Ugh I love old furniture so much!!! If you are hunting for that perfect vintage piece (in your price range), DON’T GIVE UP. Set up alerts on Craigslist, scour Facebook marketplace, show up to estate sales, pop into antique stores, make regular stops at your local thrift stores. The more you look, the more you find! If you need a cheerleader: I believe in you. You can do it. Be persistent! (If you thought this went weird, you should see how strange I get in that post. I’m not sure someone experiencing a mid life crisis like me should have internet access 😳)
Hey new decade. It feels like the first one in 20 years because the 0’s and teens are just a jumble of numbers. Consequently - maybe being born in 1980 has something to do with it - I’m feeling extra mid-life crisisy. We’ll stop there because I keep rewriting this part trying to have less of a “What are we all doing here?!” doom vibe, but the next tries only get filled with more doom. So let’s just say a shallow Happy New Year and pretend everything’s fine 😃. (In a symbolic gesture of clean slates, I’ve put away the holiday decorations and finally cleaned the construction mess off the back patio from our fence project that we finished last decade - but the crisis of mid life remains.) How is your new decade so far 😬😬😬
Merry Christmas from us weirdos! Thanks for following along this year on our weirdo house projects! And for all the encouragement, ideas and inspiration! (IRL friends: this counts as the card ✉️)
Considering how all my Christmas lights keep going out, shout out to trees that don’t need (nor can safely house!) a string of lights 😂😂
I usually end up moving stockings over here before Christmas because hanging on fireplace is cute but cluttery feeling to me = weirdo alert 🚨 Have you also entered weirdo mode and removed/rearranged anything that has gotten the best of you?
The exhibit on CA Central Coast Modernism at the @museumofventuracounty is packed with goodness!!! So much craft - go if you are in the area! Love to see the region we call home get a little design love 💛💛💛
It’s the most 🎶 busy-est 🎶 time of the year! I’d love to hear your hacks, big and small, for making it through December (merle ❤️) without losing your mind. My usuals aren’t doing the trick because I am losing my mind. Wishing for Christmas “festivities” (decorating! lights! wacky trees!!!!) without any of the “festivities” (parties 🙁 gifts 🙁 socializing 🙁). Help! (P.S. this flocked wonder is from @kingofchristmas and I’m partnering with them this Christmas to bring you 10% off with the code THEJENNYJAMES! Link in my bio! 🎄)
Life goals: make house look like a 60’s miniature golf course. Shared more of our Christmas lights in stories the other night (saved) including our crooked but lovable 10’ C9 light tree! Do you light up your house??? ❤️💚
✨✨✨
One tree per room ✅
Today I’m giving a holiday tour of our wacky house on my blog! It’s part of a blog hop with all of the lovely ladies below so make sure you check out their beautiful, festive homes as well! @love_create_celebrate @botanicaandbloom @lanternlanedesigns @dashlifestyles @strawberry.road @livingawilderlife @caitlinmariedesign @decorhint @peoniesonpleasant @chandeliers.and.champagne @willowbloomhome @thisissimplicite @aehomestylelife @nancy.yyc @thegregoryhome @sarah.g.johnson @my.westcoast.life