Out of nowhere, this room sneak-attacked my heart and I think it may have shoved into #1 ROOM position. This used to be my children’s shared bedroom, but we recently broke ’em into two and have slowly been trying to put together two new spaces. I shared the plans last time for this space for my daughter and, as you may be able to tell, those plans spontaneously changed and I’m so glad they did! A different layout than I wanted forced my creative hand and the geometric, color-blocked result is better than anything I had in mind before. It’s a little 60’s and a little 80’s neo-50’s, feminine enough for her but modern enough for me, fun but simple, and I’m in love. So is my girl. Eight year old her likes many traditionally girly things (which I did the opposite of push), like ballet and flowers and pink and princesses. Eight year old me, on the other hand, was asking for more black in my wardrobe and trying to convince my mom to take me to New Jersey so I could meet Bon Jovi. I’m not sure exactly what that says about me, my daughter, or JBJ, but I think it’s of note here because design can be the great unifier!

The half wall plus wrap-around paint job was born out of my discontent with the odd accent wall plan mentioned last time. This color (Behr Sunset Strip) is bold and a little makes a big impact, so I was worried the whole wall would be too much, especially when executed on a random wall. Late at night before paint day, I remembered how great half painted walls are. I don’t love wainscoting but I love how wainscoted rooms can be painted intense colors and never feel overwhelming. I’ve seen the color blocking trend popping up in interiors and although I’ve never thought, hey I need that in my house, it was such an obvious solution here. I had my heart set on bright white walls and a restrained hit of bright coral and this was the great meshing of the two, like a clean, modern interpretation of wainscoting. As I was messing around with walls and proportions, I loved the idea of wrapping it around the corner of the bed. I’ve never met a corner-placed bed that I was into – until now. 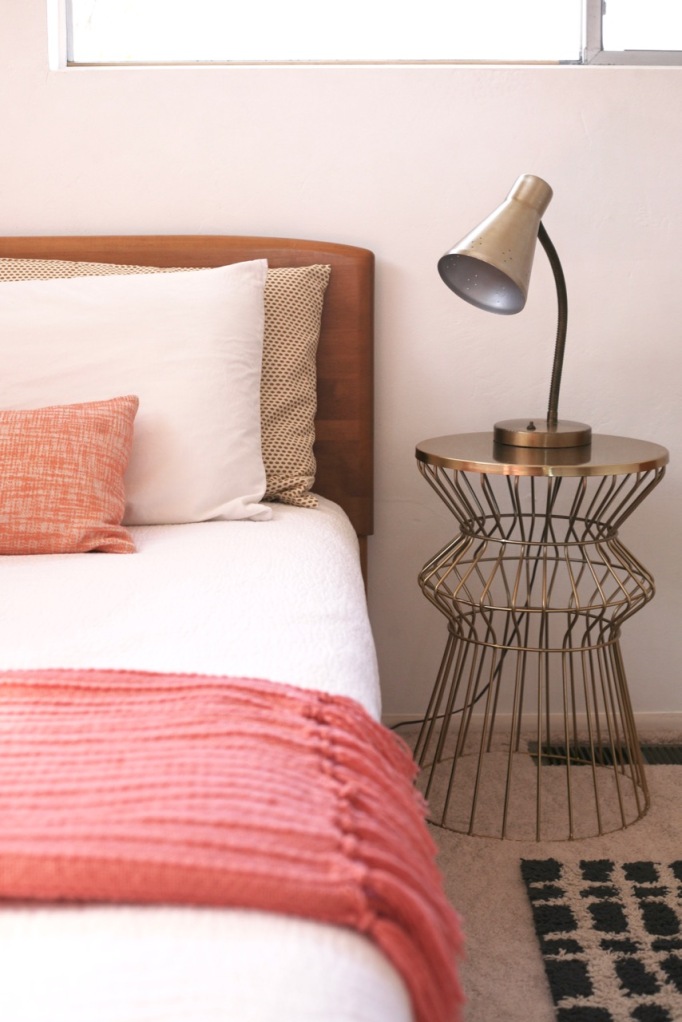 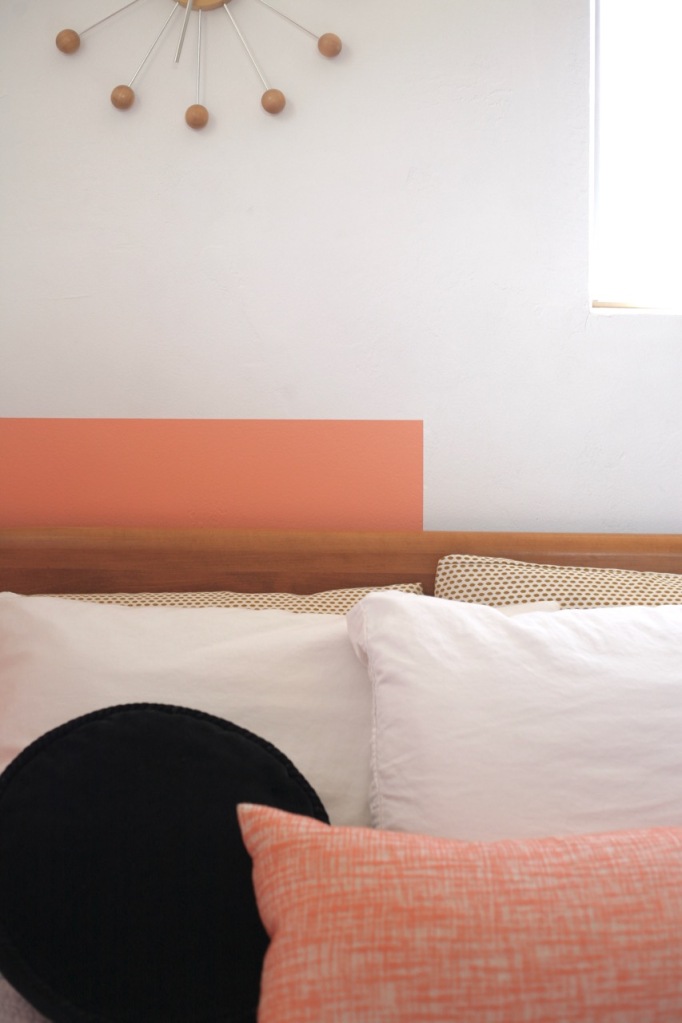 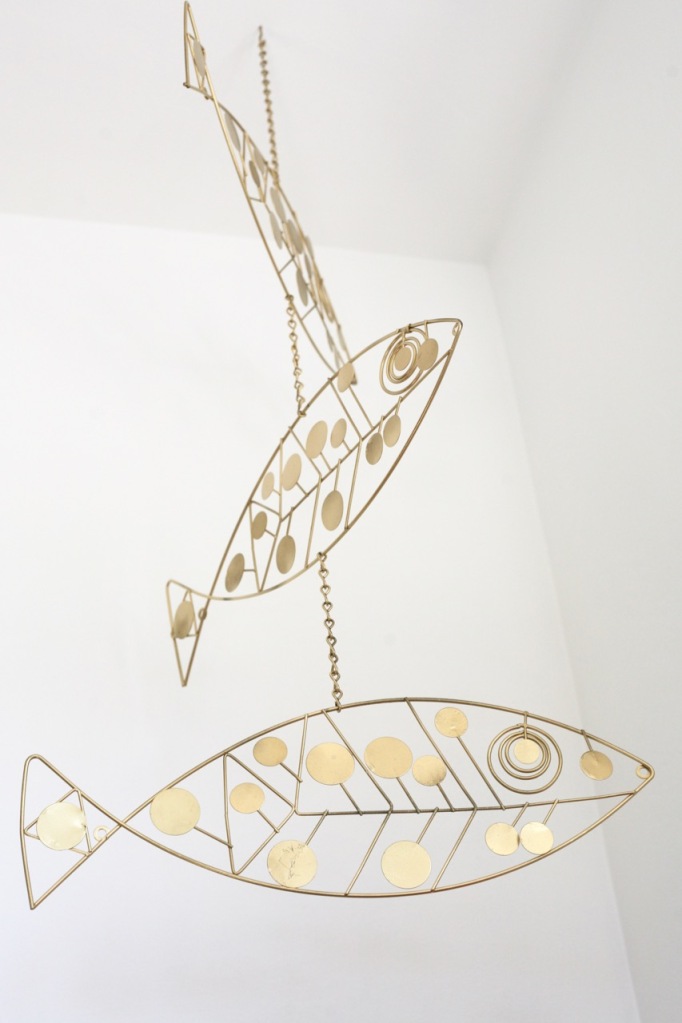 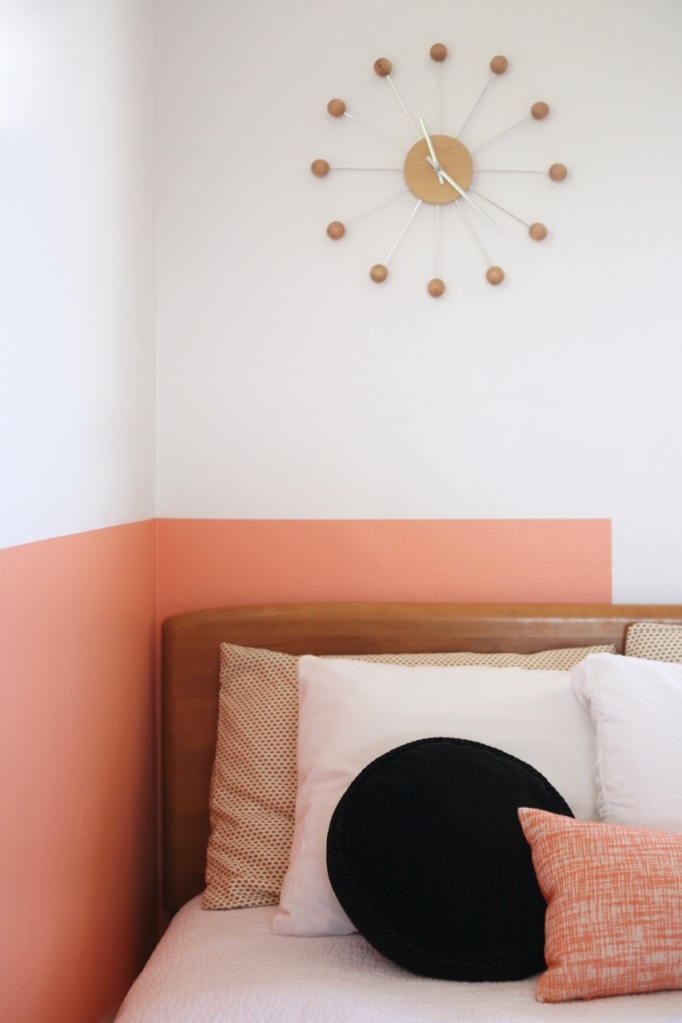 And now some dope before and afters for your viewing pleasure… 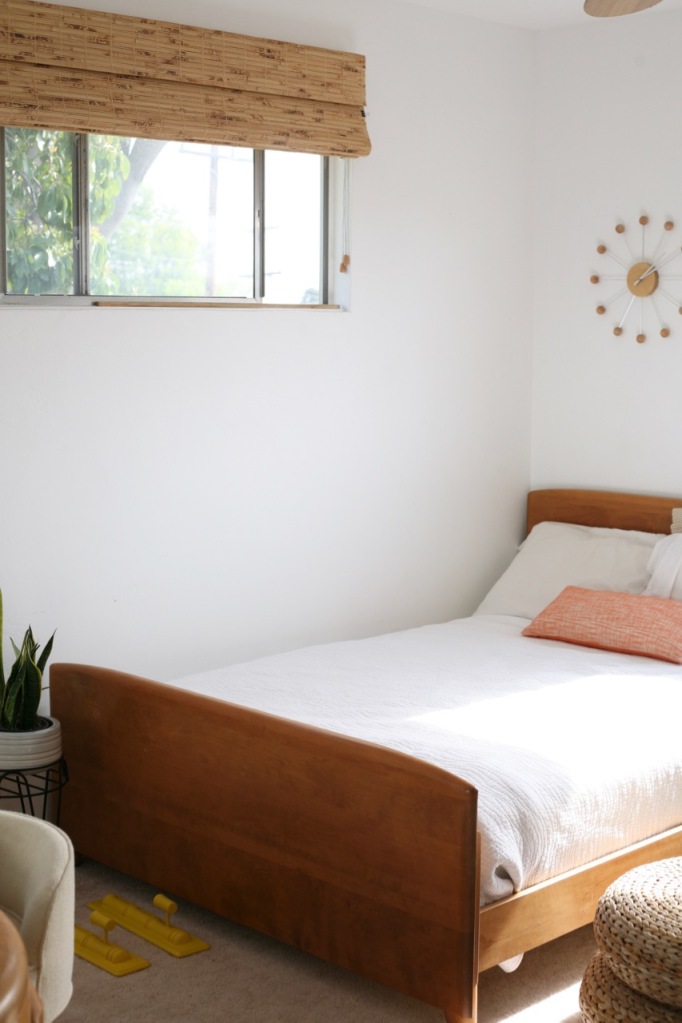 Eventually we’ll get around to replacing this old carpet with wood floors and new baseboards, though my daughter is fighting hard to keep carpet.

I’m proud to say that, other than a quart of paint, I purchased NOTHING for this room. Everything was plundered (even those fish from the bathroom, turned DIY kooky mobile), leaving me with quite a few holes to fill in other rooms. Seriously, you should see the place. It looks like we’ve been ransacked. So, I’m off to take back my home (from myself). Thanks for reading the internet! Until next time. xoxo